The Main Thing…
We are students of the game, we have played and coached at every level.  We have competed for National Championships as a player and a coach.  We have experienced what it’s like to struggle to win games as both a player and a coach.  We have been the best player on teams and have been cut from teams.  Through our careers in basketball we have had the opportunity to study and learn from some great basketball minds and teachers of the game.  Our vision is to train athletes in the skills that will allow them to achieve success in basketball and lead a fulfilled life after basketball.  The game will not end. 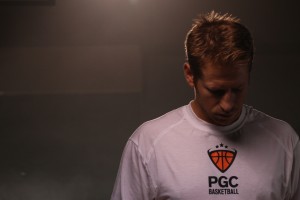 Tyler Coston, a full-time course director and clinician with PGC Basketball, first attended Point Guard College and is the owner and director of HoopStar Basketball. In 1999, Tyler led Lynden Christian High School to the Washington State Championship and earned first-team All-State honors. He went on to play university basketball at Trinity Western University, where he was named to the Canada West All-Rookie team. He then transferred to the University of Alberta and helped lead the Golden Bears to Canada West Gold and a spot in the national tournament in 2004.

From 2005-2007, Tyler coached the women’s basketball team at Trinity Western University while simultaneously running a skills-development program that produced five Division I (USA) athletes. In 2007, he accepted a position as Assistant Coach at Portland State University. During his first year at Portland State, the Vikings won the Big Sky Conference with an overall record of 23-8. After Portland State captured the Big Sky Conference tournament, they went on to the NCAA Tournament where they lost to the eventual 2008 champions, the Kansas Jayhawks.

“Coach Tyler has really impressed me by the leadership, charisma, and passion that he brought to these athletes each and every day!” – Rich Calcaterra,Observing Coach

“Tyler exudes humility, leadership, and passion for helping others.  He is wise beyond his years!” – Kevin Morgan, Observing Coach

“I liked how Coach Tyler Coston taught.  You made the game (and the things people do while playing it) make sense.  You helped me to understand why I do the things I do, and what I can do to fix what I do wrong.” – Morgan Kennedy

Favorite Book: I Love being the Enemy by Reggie Miller

Cara Childress, director of operations at HoopStar works with the athletes, families and many organizations to bring the absolute best experience for your young athlete.  Cara was a camper at Northwest Basketball Camp (NBC) for nine years, played on their International All-Star team, and coached with NBC for two years.  In 1999, Cara Childress graduated from Grandview High School being their 1st ever athlete to play Varsity all four years in three sports.   After High School Cara went on to play basketball for Clark College.

After graduating college in 2003, Cara moved to the Seattle area to manage an online jewelry company.  Seattle led to many new adventures, getting involved in multiple start ups, taking up the game of golf, and much more.

In 2012, old friends bumped into each other and led Cara to HoopStar, she is fulfilling a dream of doing something she loves around amazing people.